Just how costly is an OSHA violation? 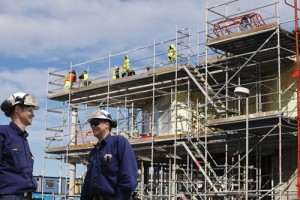 The U.S. Occupation Safety and Health Administration was first established decades ago to give workers in industries like construction and mining adequate recourse in the event of a jobsite calamity or overall unsafe working conditions. While workplace safety has improved dramatically since when OSHA was first established in 1970, every year thousands are injured or killed while clocked in and working. According to numbers cited in December 2014 by the National Safety Council, some of the most common OSHA violations from the last fiscal year were related to falls, scaffolding, trucks and ladders.

In total, over 3 million people in the United States were injured while on the job in 2013, the last year numbers on the topic were collected, according to the U.S. Bureau of Labor Statistics. There were close to 4,000 workplace deaths that year, OSHA reported. Losing a worker is always costly, and a workplace injury or fatality can lead to even further losses due to an OSHA fine. On average the federal agency will fine a company $7,000 a day for every day it is found noncompliant with its workplace safety standards, but those civil penalties can reach $70,000 depending on the severity of the issue and what the offending company had done to help prevent the issue prior to it occurring.

How to avoid OSHA violations
For businesses, losing a valuable worker for days, months or even years at a time can be devastating to productivity, and having a worker die on the jobsite is obviously a tragedy. Throw in the costs related to OSHA fines, and having a potentially unsafe work environment suddenly becomes an incredibly costly proposition. Thus it is in every organization’s best interest to take every step possible to ensure and prioritize safety on premises.

But what specifically can a business do to help protect workers? According to OSHA, one of the best ways to avoid common problems is to educate workers on the issues they face at their jobsite and what they can do to help ensure safety. Companies should also mandate safety equipment like helmets, goggles and harnesses where appropriate. Properly maintaining tools like trucks, ladders and saws also makes a big difference, as does the proper storage and dissemination of dangerous materials like gasoline or corrosive chemicals.

One perhaps surprising step companies can take to increase workplace safety and avoid OSHA fines is to install a wireless video surveillance network around the jobsite. With 24/7 site monitoring, organizations can expect to realize the following benefits:

By installing remote video surveillance technology at a jobsite, an organization can be sure that its employees are well looked after and that they can work under safe conditions at all times. This is critical not only for preventing injuries or other serious calamities from occurring, but also for avoiding costly fines from regulators. To learn more about the benefits of video technology for workplace safety and industrial oversight, be sure contact a Firetide representative today.