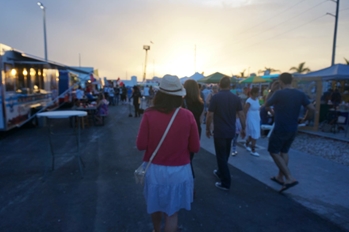 Outdoor festivals are as popular as ever in 2016. Specific events such as Lollapalooza and the CMA Music Festival have been breaking their own attendance records for years. Lollapalooza hosted 100,000 visitors per day in Chicago's Grant Park in 2015, according to Billboard magazine, and the 2016 edition of CMA Music Festival sold out months in advance and saw daily attendance in excess of 88,000, as per official estimates.

Such events of course extend far beyond just music, and may include food, arts exhibitions and other activities and amenities. The Berklee College of Music's Music Business Journal estimated that more than 32 million people in the U.S. attend at least one festival with music a year, with many of them traveling over 600 miles to get there. This attendance boom should continue as media consumption habits change and live events become an increasingly important revenue stream for artists and a must-see for consumers.

The role of video technology at outdoor festivals

Video systems play a central role at many of today's largest outdoor events. With tens of thousands of people often gathered in small areas, safety is priority, as is crowd management.

Some festivals include metal detectors, bag searches and/or pat downs at their entrances to screen for contraband, but lack additional security measures throughout the festival grounds. As a result, human security personnel may struggle to keep up with the huge crowds, leading to possible safety incidents as well as overly crowded lines to vendor stands and restrooms.

Enter video monitoring solutions. Strategically placed video cameras can serve as the eyes and ears for festival operators, even if guards and police are not around or available. A video system can offer:

Across the board, video systems can provide security as well as economic benefits to both festival-goers and event organizers. The watchful "eyes" of the video solution work in tandem with other security mechanisms to foster a safe environment and protect property.

The supporting infrastructure for video systems at many sites is still cable-based, which can create issues for future-proofing. For example, the copper cables used in a video solution may need to be removed if the site is ever renovated.

Moreover, laying new cable can be relatively expensive and time-consuming, not to mention potentially disruptive. Cable may need to be run through old venues such as sports stadiums that were not built with computer networking in mind. Setup and removal are both challenging in their own ways when working with wired solutions, adding extra layers of complexity to the already hectic preparation efforts that go into just about any outdoor festival.

For these reasons, wireless solutions have become more popular in recent years for supporting video systems at festival venues. They now have the technology to support smooth, jitter-free images that can be transmitted even across great distances. From edge devices back to central security centers, wireless mesh network offers top-notch performance without any of the setup complications associated with wired systems.

The city of Mission, Texas, wanted a way to improve public safety and help city personnel keep an eye on the streets. Officials ultimately decided on a Firetide wireless mesh solution, since it offered all the functionality of a fiber-based network at a fraction of the cost.

First implemented in 2009, the system was expanded in 2012. It utilizes cameras in parks and on utility poles, similar to how an implementation might work at an outdoor festival. The solution has proven highly scalable and cost-effective, helping to reduce crime and promote safety throughout the city.

"We have deployed more than 1,000 Firetide wireless mesh nodes for our customers over the past three years with excellent results," said David Madrigal of Teksys Wireless Solutions, which integrated the technology, in assessing the project's expansion. "The flexibility, performance, reliability and advanced features of their infrastructure make it a perfect fit for the Mission PD as well as other public safety, municipal and industrial installations."

Festival organizers have plenty to gain by outfitting their sites with video systems. Find out more today about how to get started with the right technology by visiting Firetide.com.