LASD's Century Station serves the 13-square-mile Lynwood area, which has twice the national average of violent crime. The citizenry of over 300,000 is vocal at town hall meetings in its support of local authorities taking all necessary action against crime.  Frequent topics at these town hall meetings are gang violence, prostitution, and drug dealing.  The nonprofit Safe Cities Foundation was able to fund the new video surveillance project, coordinating donations from Firetide and other companies such as Belkin and Best Buy.

[The network] provides the deputies with real time intelligence if, in fact, there is an armed suspect—it allows them to move more safely and effectively attack that problem—and also to prevent crimes or interrupt crimes in progress. 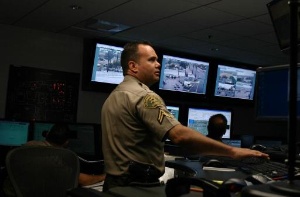 The wireless video system assists the department in identifying and tracking suspects, leading to prevention and interruption of crimes in real time. Two additional key features of the system include automatic license plate recognition and acoustic gunshot detection. High bandwidth allows broadcast-quality video at full frame rates (30 frames per second), and the analog cameras can zoom in to read a license plate from 200 yards away. The plate recognition solution, provided by PIPS Technology, passively scans license plates. The plates can then be run through stolen vehicle systems as well as watch and warrant lists. Video cameras have been placed at key intersections, near schools, and near two hospitals. The initial deployment includes 11 cameras, but the system is extremely scalable; Firetide's wireless mesh network opens the door for future growth. The acoustic gunshot detection system uses ShotSpotter technology.

From the 9-1-1 dispatch command center that receives the real-time surveillance video, watch deputies guide teams on the ground as they respond to calls for service. The wireless surveillance solution not only protects citizens and increases officer safety in the moment, but also assists in the prosecution of crimes.  The image quality is evidence-grade and can presented in court by district attorneys.

Several arrests have already been made using the new system, including one in which deputies spotted a drug deal in progress in the park next to a neighborhood school.  One arena in which the technology has been especially helpful is in diffusing gang-related activity.  Using video surveillance, the department can determine which gangs are involved in a crime and quickly move on retaliatory gangs before they take further action, thus preventing situations from escalating.